The start of this year’s Gdynia Film Festival also saw the official opening of the Gdynia Film Centre, a new investment which has revitalised a part of central Gdynia and which increases the attractions for visitors to the city further.

Including a film school, gallery, bookshop, café, restaurant and a cinema, the PLN 37 million investment has also seen the neighbouring open-air stage modernised and the not insignificant addition of 200 underground parking spaces right in the centre of Gdynia. Lawns have replaced concrete spaces and the adjacent cable-car system which takes visitors the 40 metres up Stone Hill (Kamienna Góra), have made this once rather nondescript area an inviting part of the city once again.

The project was funded with a 22 million loan from the EU’s Jessica program with the remainder coming from the Gdynia city budget. 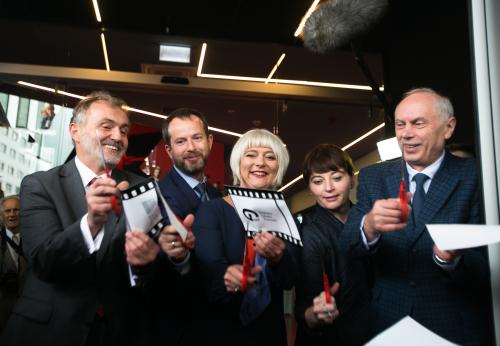 The building was officially opened by Gdynia President Wojciech Szczurek on Sunday September 13 and the event was attended by a crop of well-known faces from Polish cinema, who are in town to attend this week’s Gdynia Film Festival. There was a series of events and presentations to mark the building’s opening including special film screenings as well as demonstrations of special effects and displays of film equipment.

This article was written based on a piece on Trojmiasto.pl. Click further to see a film of the opening day.