President Lech Walesa, together with the President of Gdansk Pawel Adamowicz, Basil Kerski, director of the European Solidarity Centre (ECS), and Ryszard Trykosko, president of Gdansk Municipal Investments (GIK) today visited the European Solidarity Centre to check how construction is proceeding. President Walesa also visited his future office which will be found in the building. The ECS is scheduled to open to the public on 30-31 August 2014, on the anniversary of the signing of the August Accords.

Lech Walesa today visited the construction of the European Solidarity Centre in Gdansk. The building at Solidarity Square 1 will have an exhibition which tells the story of the Polish democratic movement and struggle for independence in communist Poland. The life and story of Lech Walesa are an important part of the narrative. The association of the former president with the ECS is not just symbolic. It is his signature that is first on the letter of intent signed in 2005 which set out the creation of the ECS. Today Lech Walesa confirmed that he will move his office to the ECS building. 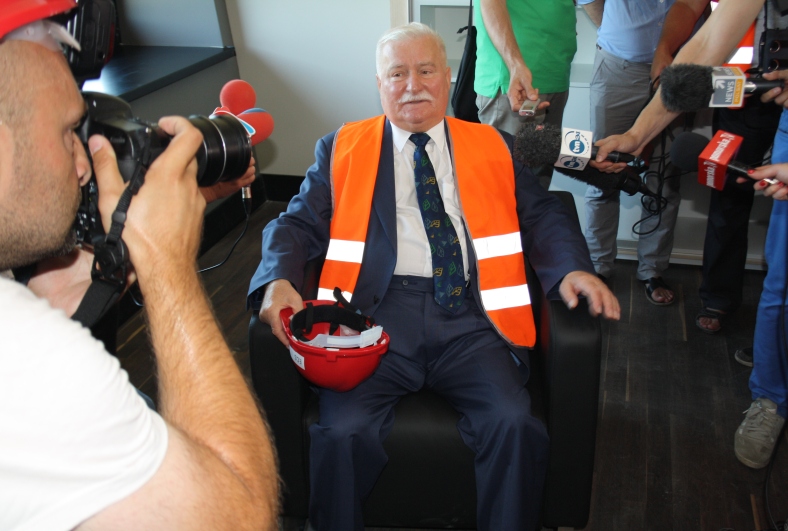 “As for the design of the building I have doubts, but the work is underway, it’s being completed and I see that it’s going in the right direction. I really like my office” said President Walesa.

This view was echoed by Basil Kerski, Director of the ECS. “The European Solidarity Centre is designed to be a place that unites and Lech Walesa was a patron of the Polish incarnation of the idea of cooperation, assistance and sensitivity to the needs of others” said Mr. Kerski. “The office of the President at the headquarters of the ECS is not just a change of address, but also a symbolic marker for a certain stage in the development of our institution, which began with the signing of the letter of intent in 2005 by 27 heads of state and heads of government”.

Lech Walesa spent an hour and a half at the construction of the ECS. After familiarising himself with the size and layout of his future office, President Walesa carefully examined the building, touring the headquarters of the library, the public spaces and auditoriums and the winter garden with Ryszard Trykosko, president of Gdansk Municipal Investments, who realised this investment on behalf of the City of Gdansk. Next Pawel Golak, head of the Museum Department, ECS Archives and Library and ECS Director Basil Kerski explained to President Walesa the idea behind the permanent exhibition and the activities of the ECS. Visiting another room President Walesa inspired a lively response from those working on completing the construction and those building the permanent exhibition. Cordial and open as always President Walesa joked with them and willingly posed for pictures. He was even persuaded to get into the cab of the electric truck and onto its platform - like he’d done during the August strike in 1980.

“I am very pleased that President Walesa likes his office in the European Solidarity Centre, as well as how this building is developing, because the president is an important appraiser of the ideas of the ECS and without him this idea, the exhibition and the building would be incomplete” Gdansk President Pawel Adamowicz said summing up today's visit.

Construction of the European Solidarity Centre in Gdansk began in the autumn of 2010. The ECS building has almost 26 thousand square meters of usable space, where you will find not just the permanent exhibition, but also temporary exhibitions, archives, a library with a reading room, a media library, a research centre, an educational and training centre and creative workshops for young people.

The cost of the construction is PLN 229 million, of which PLN 113 million has been provided by the EU with the rest coming from the budget of Gdansk. The establishment of the permanent exhibition has been financed by the Minister of Culture and National Heritage.