The city of Tczew is set to become home to an innovative new Shipwreck Conservation Centre which, for the first time in Poland, will simultaneously function as both a museum storage/restoration solution and a visitor attraction. The cornerstone of the new National Maritime Museum facility was laid in November, and on completion it will be possible for the general public to see exhibitions of collections covering over 40 years of underwater archaeological work. If all goes to plan, the centre will open its doors in early 2016.

Based on an operational model which is particularly popular in the Netherlands, the dual-purpose centre will be the first of its type to open in Poland and will take over wreck restoration/conservation work which has hitherto been conducted at the Maritime Culture Centre in Gdansk. This latter venue was ill-suited to such work, which routinely involves deconstruction and treatment of large components, and so the museum sought an EEA grant to provide for a specialised, custom-built centre.

This was achieved with the support of Norwegian funds, 85 percent of the 22 million zloty total coming from the financial mechanism of the EEA, and 15 percent from the Ministry of Culture and National Heritage.

“We first created the position of underwater archaeologist and conservator almost 40 years ago,” says Jerzy Litwin, director of the National Maritime Museum. “In 1984, we set up in the former factory of the Vistula River Museum in Tczew but back then the conservators had studios in dismal conditions inside the old factory production workshops. Now, thanks to the Norwegian funds, it will be possible to realise a centre, which will have the highest standards.”

Implemented in partnership with the Polish-Norwegian National Maritime Museum in Oslo and the Museum of Cultural History in Oslo, the new centre will boast the very latest restoration equipment/facilities including a modern 3D scanner, a mobile X-ray unit and special pools for the maintenance of delicate wrecks. 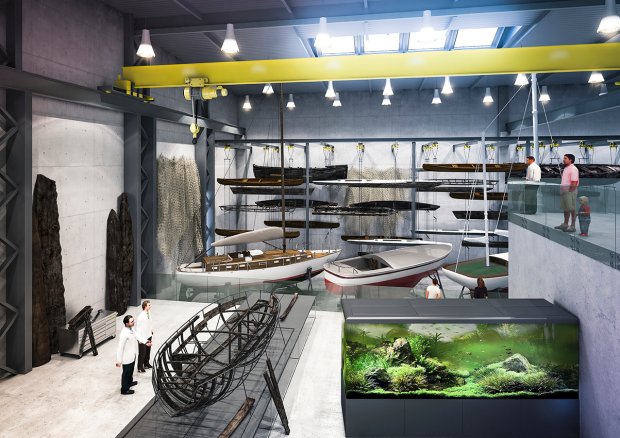 The public exhibition space, to be housed in one wing of the building, will also be highly impressive with visitors being able to interact with a series of extraordinary exhibits, including ‘Opty’ (the yacht used by Leon Teliga to circumnavigate the globe in 1967-69) and pieces of wreckage from medieval Slavic vessels, by way of multimedia stations and mobile apps. One of the major highlights is expected to be a model robot used for underwater exploration.

All this, in addition to the central location of the new building on the plot behind the Vistula River Museum, is being viewed as a great opportunity to attract more tourists to Tczew and the surrounding area.

“The construction of the centre has been the director's dream for many years and I am glad that it will be in Tczew, a deserving town in terms of Polish maritime heritage, having set up the first national naval school during the Second Republic of Poland,” says Malgorzata Omilanowska, Minister of Culture and National Heritage. “Tczew has some very interesting monuments and, through the centre, it will be possible to show them to a larger number of tourists. Tczew Bridge, for example, is one of the most interesting in the whole of Europe.”

This article was based upon a piece that appeared on trojmiasto.gazeta.pl at the end of 2014.