Polish ports are becoming the most important ports on the Baltic Sea thanks to the investment which has taken place in the last couple of decades - that’s the view of the head of the Department of Economic Policy at the University of Gdansk, Professor Henryk Ćwikliński, who described the scale and rate of development as a phenomenon. “The current and future investments make a huge impression and Polish ports are becoming the most important on the Baltic before our very eyes”.

The reasons for this success include, among others, European Union policy.

“The location and navigation conditions of the Ports of Gdansk and Gdynia have been recognised by the EU. We have a significant position on the Baltic-Adriatic corridor. Gdansk already has very good road connections with the hinterland and planned investments by PKP PLK (Polish Railways) will ensure excellent rail connections with the port as well” said Janusz Kasprowicz, a spokesperson for the Port of Gdansk. In his opinion, the creation of appropriate port infrastructure in free market conditions provides a return quicker than in any other transport field.

Aneta Szreder-Piernicka, Director of Trade for the ports Szczecin-Swinoujscie, emphasised that largest investment projects have taken place in Poland thanks to the EU. The port authorities also invest their own funds but money from the EU has allowed for the implementation of major projects.

And the resources needed to carry out improvements and investments in ports are absolutely huge. In the southern part of Swinoujscie port for instance, there are plans to build a new dock to allow the mooring and maintenance of ferries and large cruise ships. The length of the new quay will be over 240m with a depth of 12m, which makes it possible to receive vessels up to a maximum length of 220m, something which Swinoujscie has not been able to do before. Completion of the project is planned for Autumn 2014 and the cost is estimated to be PLN 152.7 million a comparatively small figure when compared to the 362 million invested in modernising the approaches to Gdansk harbour and the quays. 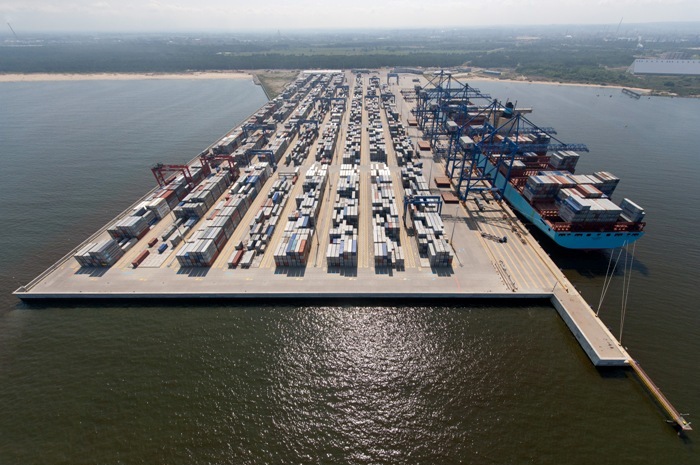 The DCT in Gdansk. Photograph by Kacper Kowalski, aeromedia.pl

These investments ensure that the ports will continue to develop for many years. Gdynia is another which has made a strategic investment by building a turntable, which allows it to be able to turn floating ships around in the port. The size of the turntable affects the size of the ship which can enter the port.

“Even bigger vessels, especially container vessels, will be able to sail to Gdynia” Janusz Jarosinski, CEO of the Port of Gdynia, told Gazeta Wyborcza. “We have finished testing the soil and design work has begun. The completion of work is planned for 2017 and the turntable will cost approximately PLN 100 million. Part of the work will necessitate dismantling part of the quay purchased from the naval shipyard. Mr. Jarosinski estimated that in the years 2014-2016 the port’s board would invest over PLN 700 million.
More investment will be carried out in the coming year, and there should be even more funds available to make this happen. This is thanks to the CEF

“This is a new fund for member states which will be available in the period 2014-2020 said Janusz Kasprowicz. It will be taken from the cohesion funds and is intended for projects related to transport sustainability; from this fund investments in rail, sea, inland, intermodal and related road safety will be made”’

Visible effects of this investment

Investment in infrastructure has a knock-on effect and thanks to infrastructure investment other companies are attracted to the port. The most spectacular investment in recent years has been the launch of the DCT (Deepwater Container Terminal) in Gdansk’ Northern Port. The largest container ships in the world now call here and the port has a capacity to handle 1.5 million TEUs. (a standard container is normally counted as 2 TEU). In 2013 the port handled its 1 millionth TEU and there are plans to extend the DCT in 2016 with the addition of a new terminal.

And there’s more. The terminal has inspired other local investments – in May a renovated railway spur came online around which has been built a large logistics centre named the Goodman Pomeranian Logistics Centre. Built on a 110 hectare plot, there is space for logistics warehouses, production halls with integrated office space and with a total area of over half a million square metres.

Interestingly, Gdynia does not perceive the  investment in DCT at Gdansk as a great threat to two of its terminals.

“Yes, the first reaction was that a large competitor is entering the local market” admitted Mr. Jarosiński. “However, we found that the Gdansk terminal pointed carriers in the direction of the Gulf of Gdansk as a whole. The result is that overall container traffic is growing”.

Warehouses are also being built in Gdynia. “Warehouses are under construction for grain and feed” said Mr. Jarosinski. “There is great interest in utilising them, because this reflects market trends as our exports in these fields are increasing”.

Here are many projects of a similar nature. Work is progressing on the Naftoport project, which has expanded on the back of the expansion of the PERN fuel depot. There’s also investment in a frozen food terminal and last year Gdansk expanded its bulk cargo handling terminal at a cost of over PLN 170 million.

“Investments in ports are great, but I'm afraid bottlenecks will appear at port departure points” said Prof. Ćwikliński. “There must be rapid investment, particularly in rail, so products can be handled quickly and despatched into the country”.

Work on road and rail investments are advanced. The Port of Gdynia recently signed an agreement to redevelop part of the railway network in the port area. The cost of construction is more than PLN 70 million. Important changes are also taking place in Gdansk. “A few days ago PKP PLK received permission to build a double-track railway line from Pruszcz Gdansk to the Northern Port, along with a new bridge over the Martwa Wisla river” Janusz Kasprowicz said.

This is a huge development. The existing bridge had a single line track and it was in poor condition resulting in restricted speeds being enforced. As a result of the new investment in Gdansk Port 240 trains will now be able to leave daily where only 82 were able to leave previously.

A political recipe for success

Investment in Polish ports has translated into an increase in cargo handling. In 2013 figures were 9 percent up on 2012 with more than 64 million tonnes of cargo.

Professor Ćwikliński, speaking of the great investment and success in ports, also pointed to another aspect of the case.

“For years now, the port has a stable personnel, there are no political games, highly qualified specialists are being appointed to senior positions rather than managers chosen by political appointment. As you see, such a policy brings great results”.

The effect can be not seen not just in investment but also in the organisation of the ownership structure in the ports. Gdynia has one more reason to be pleased. On July 1, 2014, the last publicly-owned business was privatised- the general service terminal. Now the port is working to a planned model – the port authorities manage the land and the infrastructure, run investments, and the loading and maintenance of ships is undertaken by private companies .

This piece is based upon an article written in Polish by Artur Kiełbasiński and published in Gazeta Wyborcza on 02.08.2014.