It's been two years since a new agreement came into effect that allowed travellers to cross the Polish - Russian border under a scheme called the Maly Ruch Granice (MRG). July 27 this year saw the second anniversary of the operation of the MRG, Lieutenant Justyna Szubstarska, the press officer for Warmia and Mazury Border Guard told Spedycje.pl.

The agreement was designed to ease the process of crossing th border for the residents of the Kaliningrad Oblast, the Tri-city and the Warmia and Mazury region.

The border services implemented solutions with a view to the new rules such as separate queues at road crossing points on the border for those using the MRG which have significantly improved the flow of traffic.

Also passport processing and custom clearance have been improved. Crossing the border is quicker for people with a MRG permit is quicker than for those with a visa. The first MRG traffic lane was introduced at Grzechotki and its success led to the opening of further MRG traffic lanes at other border crossing points in Warmia and Mazury.

During the two years of the MRG 2,483,956 people have used the service. Currently every second person entering Poland from Kaliningrad is doing so on an MRG permit.  The Polish Consular General in Kaliningrad has issued more than 200,000 MRG permits since 27.07.2012.

The MRG allows residents of the border regions to repeatedly cross the border between the Republic of Poland and the Kaliningrad region of the Russian Federation once they have received the permit.
Border residents are defined at those who have lived in the area for at least three years, regardless of whether they are Russian or Polish citizens or not.

Crossing the Polish – Russian border is only permitted at land crossings and provided that the traveller:

- not a threat to the public, internal security, public health or international relations.

Permits to cross the border under the MRG are issued by:

- Consulate General of the Russian Federation (FR) in Gdansk

- Consular General of Poland in Kaliningrad.

The border area covered by the rules of the MRG are: 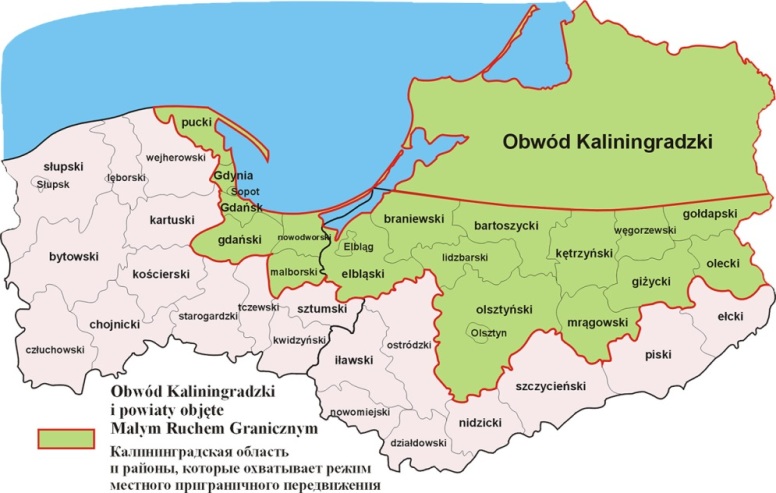 In the Republic of Poland:

In the territory of the Russian Federation:

Rules concerning entry and length of stay in the border area covered by the MRG.

People crossing the border may not stay for any longer than 30 days in the other country. People are also limited to a maximum of 90 days in any six month period starting from the date that the border was first crossed.

The following are points at which holders of an MRG permit can cross the border:

To travel beyond the border zone covered by the MRG is only permitted if the foreigner holds a visa and used it to cross the border.

This piece was written based on an interview with Lieutenant Justyna Szubstarska from the Warmia and Mazury Border Guard which was published on spedycje.pl on Tuesday July 29, 2014.